Posted on April 20, 2013 by thymallusarcticus

We are getting reports of numbers of freshwater Lampreys returning to spawn in the beck, which is good news (Mid April 2013).
Try to disturb them as little as possible. In particular try not to damage their spawning redds, or nests as they are sometimes called. These are easily seen as small depressions with clean gravel and stand out from the surrounding river bed, avoid wading on them. 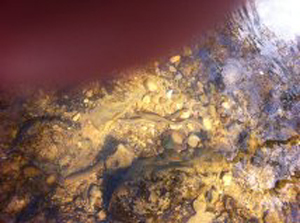 Regarding the fishing, the beck is fishing extremely well at the moment.

I’m getting reports of a lot of trout being caught, mainly 7-10 inches with a sprinkling of better fish up to 1lb 10oz. If you have caught a better one please let us know.

Fisherman
View all posts by thymallusarcticus →
This entry was posted in News. Bookmark the permalink.
Loading Comments...